The walled city of Intramuros was the seat of political power when the Philippines was a Spanish colony. Protected by bastions, moats, cannons, and bulwarks, the wall enclosed about 64 hectares. Within are the Spanish elite's stately homes, churches, monasteries, cobbled plazas, and schools, including the original University of Santo Tomas.

Fort Santiago was the citadel of Intramuros, situated nearest to Manila Bay. Formerly the palisade fort of Rajah Sulayman, the sultan of Manila, the fort facilitated Galleon trade with Acapulco across the Pacific Ocean for more than 200 years. Most noteworthy, Jose Rizal was imprisoned here until his execution in 1896.

From its establishment in 1571, Intramuros withstood attacks from Chinese pirates and Dutch forces, as well as the British, American, and Japanese occupations. It finally yielded on the closing days of World War II, when the Japanese Imperial Army made their last stand against Allied Forces and Filipino guerillas in the Battle of Manila. All of Intramuros' buildings were destroyed, save for the San Agustin Church.

Intramuros today is a rich mix of well-managed parks, colonial-style boutique hotels, and heritage landmarks. These include the Manila Cathedral (the episcopal see of the Archbishop of Manila), Baluarte de San Diego, Plaza San Luis, and Palacio del Gobernador (the COMELEC and HDMF/Pagibig offices).

The free guided map by the Visitors Center is especially helpful for a walking tour, pointing out various areas and artifacts with a story to share. Or you can take a kalesa, the traditional horse-drawn carriage, to get around. Some can take you as far out as Binondo, the world's oldest Chinatown.

Most of the existing fortifications are accessible to tourists. In such sections, walking along the top of the walls is allowed, lending sweeping views of the surrounding streets and golf course.

How to Get There

The walled city of Intramuros is nestled right at the heart of Manila, along major thoroughfares and close to many important government and commercial establishments, making it very accessible to anyone who wishes to visit. For international and local tourists coming from outside the capital, flights to Manila will land in any of the four terminals of Ninoy Aquino International Airport, which are all situated in the nearby cities of Pasay and Paranaque. From the airport, several land transport options will take visitors to Intramuros.

Riding a taxi or booking a car service through apps are the most convenient options since they go straight to Intramuros. Fares are relatively affordable, however, the heavily-congested Metro Manila traffic will test your patience and pockets, as spending more time on the road will increase the final fare — so do have an allowance for any surges.

Public trains are also available, with many stations dotted around the metro, and are much more affordable to use. However, expect many transfers and some walking since the different train routes are not necessarily connected with each other. If you wish to do this, ride the Light Rail Transit 1 (LRT 1), alight at the Central Terminal Station, and walk to the pedestrian underpass that takes you across Padre Burgos Street. Once you exit the underpass, you will then see Victoria Street that is connected to Intramuros.

Jeepneys, the most popular form of transportation in the country, are also an option to reach Intramuros. But for first-timers in the city, the different route signages may be confusing so it is best to stick with riding a taxi or car service for a more convenient travel to Intramuros.

Intramuros is accessible any time of the year. But walking or biking around are the best ways to explore the historical landmark so it is recommended to visit during the dry months of December until May, which sees very little chances of rain. However, summer months in the country can get intensely hot so best to show up with an umbrella and by wearing comfortable clothing and a headgear. Many attractions within Intramuros, including century-old Churches, forts, and restaurants, are roofed or housed in buildings so visitors can still enjoy being there during the rainy months of June to October.

If you plan to take many pictures, which you probably will — given the magnificent structures and wonderful scenery in Intramuros, it is best to visit during daytime. But going at night also has its advantages, the well-lit buildings and churches give the entire area a nostalgic charm, and there are also lesser crowds during this time.

Do I have to pay to enter Intramuros?

There is no entrance fee to visit Intramuros. You can already see and enjoy most of the area without having to pay anything. However, some attractions inside such as Fort Santiago, San Agustin Museum, and Casa Manila charge fees to be able to enter. Transport options to explore the area such as pedicabs (similar to a rickshaw or tricycle but uses bicycle instead of motorcycle), kalesa (horse-drawn carriages), and bamboo bikes also come with charges.

Are there places to eat inside Intramuros?

There are several dining establishments inside Intramuros, ranging from small coffee shops to upscale restaurants. Barbara’s Heritage Restaurant takes you back in time with its Spanish era-inspired interiors and old-world charm, serving a mix of Filipino and Spanish cuisine. Ilustrado is also an iconic Intamuros spot, considered a fine dining restaurant with exquisite Filipino and Spanish dishes. Take a break from your walking tour around Intramuros and sample some pastries and coffee-based drinks at Cafe Janealo, located right beside the magnificent Manila Cathedral.

Can I do photoshoots inside Intramuros?

Taking pictures inside and around Intramuros, from its grand buildings, century-old churches, and charming corners, for personal purposes are totally free. However, for-profit photography and videography such as TV commercials, infomercials, and movies, and non-profit and academic purposes such documentaries and books need for a permit to be secured from the management.

What time does Intramuros open and close?

Intramuros has no official opening and closing hours, which means you can go and explore the landmark any time. However, the establishments inside will have their own business or operating hours.

How many hours should I spend to explore Intramuros?

This largely depends on what you plan to do inside Intramuros. For those only wishing to do sightseeing and take photos, 2 hours will be enough. But if you wish to go inside the forts, churches, and other buildings, you will spend longer time than that. Also, it is recommended to take some refreshments or go for an entire meal in one of its many restaurants and cafes inside, so spare a little more time — close to half a day — to fully enjoy Intramuros. 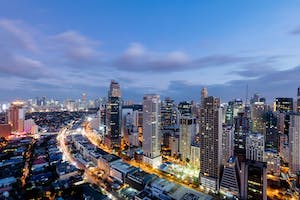 Top things to do in the Philippines

Discover all the adventures you can experience in the Philippines